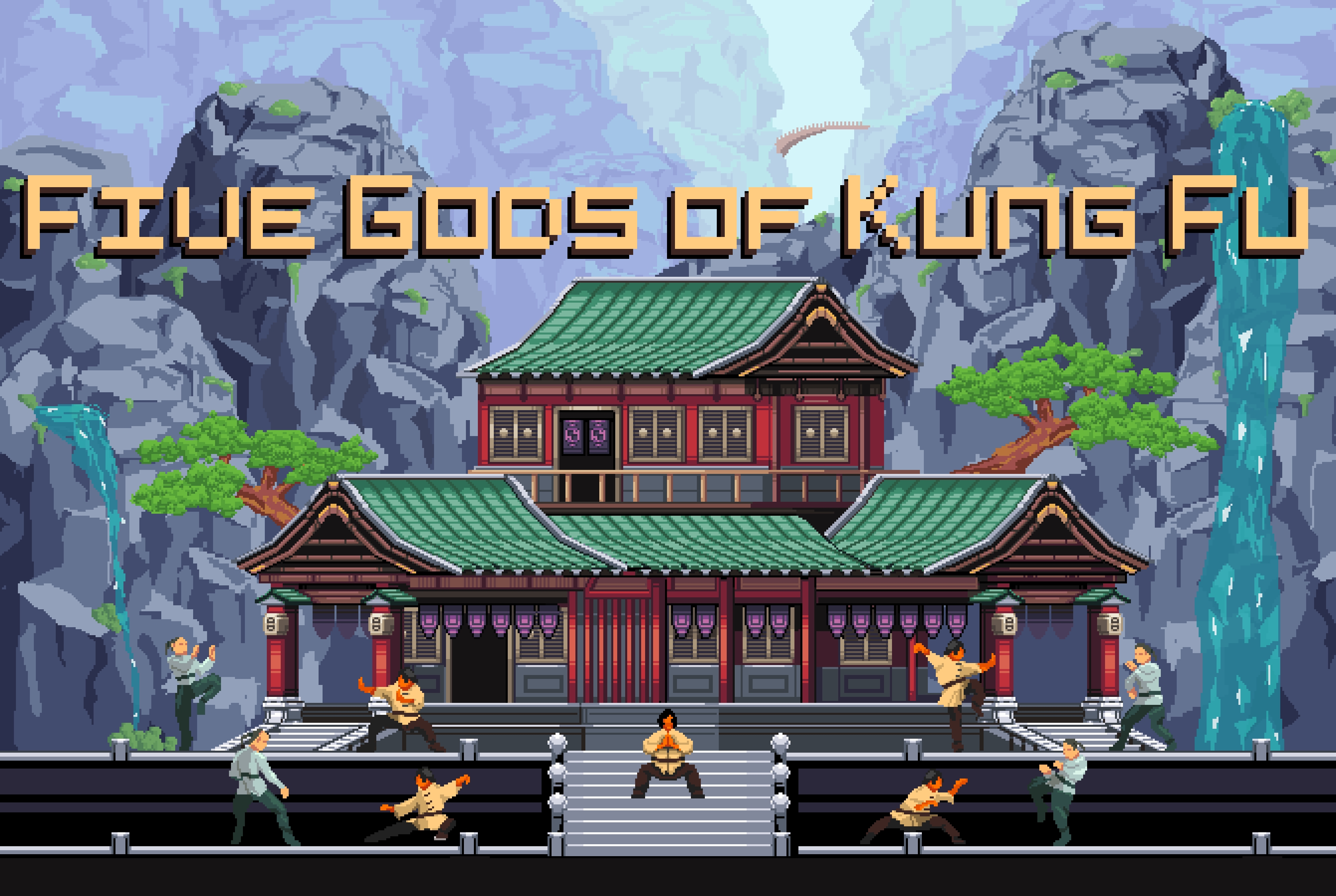 ATTENTION: The Kickstarter for Five Gods of Kung Fu is now LIVE

The Five Gods of Kung Fu is an action game heavily influenced by fighting game inputs.

In order to keep the land from being torn apart you will need to find and master the five ancient fighting styles and defeat the different clans who want rule over the nation.

DISCLAIMER: This is still an early demo for kickstarter.

The full game will feature (at least) five different fighting styles based on the Kung Fu movies of old. Animal styles like Snake, Tiger and Praying Mantis but also Drunken Kung Fu and others will feature unique mechanics that fit their style. Stances can be switched on the fly for stylish combos.

Not a game for button mashers! A unique input system using the face buttons of a gamepad for inputting motion like strings. I also incorporate ideas from fighting games which you will need to practice in order to truly master them.

A big world to explore with charming characters and stunning vistas. Keep an eye out for hints as to where the five Kung Fu Masters might be hiding.

Enemies will learn your attacks and start to counter them if you use them too often. You will need to mix up your moves and surprise enemies with new fighting styles and perfect strikes (timing based) in order to open them up.

Keep in mind the demo is intentionally kept quite easy, to give the player some time with the rather unique input method. The further you progress, the tougher enemies will become.

Any chance of a linux build for the demo?

Also what are your plans for testing with Mac and Linux builds, will you be able to cope with the target to release on Win, Mac Linux at launch?

I enjoyed the demo. If you want you can see my playthrough here:

I enjoy the artstyle and music quite a bit. I am quite a fan of the gameplay and feel it really came into its own in the restaurant group fight.

I feel the timing for perfect strike is  a little too precise. I would like some sort of indicator whether my attempt was too early or too late so that I can practice more easily.

I messed around in the practice dojo and I found it impossible to perform any move that has an input that begins with an input for a different move another (for example the first two inputs for Drunken Flute are the inputs for Bottoms Up so any attempt to perform Drunken Flute is interrupted by Bottoms Up), so it seems like either I'm doing something wrong or the window for accepting inputs needs tuning.

Hey I couldn't get past learning the first combo move - ether L KL or J KJ - as I tried multiple things - different timing, pressing KL both at same time - and there was no feedback on what I was doing wrong.

Also, my gamepad did not register so had to use keyboard.  It is a random off-brand gamepad but usually don't have any issues with it.

Thanks for the feedback!

Can you tell me what controller exactly you tried to use? Then I can look into it and see what I can do.

As for the combo:

I'll have to improve the feedback a bit, so a player can understand what he/she is doing wrong.

In the meantime you can try to look at the command prompt. It will light up in the timing you are supposed to do. Try matching your input with how it lights up. Hope that helps!

Controllers are something like this.  Not the same brand but exactly the same otherwise.

Thank you! I'll check them out and see what I can do.

Wow this is amazing! It's great how much the feedback helped! I'll try to be more active with the game since I was going through things but I'm back on track with things. Can't wait for the future!

Hello. Seems really cool, so far, but I think you should work on the controls as soon as possible!

Since the controls are so unfamiliar, you should probably give the option to keep the moves on the screen.

There should also be better feedback on the input - I never succeeded in the special "snake strike" and I have no idea if my button press is too early, too late, if it is registering at all.

Finally, since the movement is based on "motions", perhaps using the analog stick on the right would be better. Pressing a sequence of buttons on a gamepad is very different in each direction and the analog would maybe help.

These are criticisms quite apart from the game's quality. It's just that there should be a smoother way to get used to the controls!

Thank you for your feedback!

The controls in general seem to be a challange to a lot of people and not as intuitive as I had hoped. I plan to add better feedback to the player as to what they might be doing wrong.

I like your suggestion of keeping moves on the screen!

As for your analog stick suggestions:

Right now I feel, that the analog stick is not precise enough, but I'll keep your idea in mind and will keep experimenting.

When you say "snake strike", do you mean this? 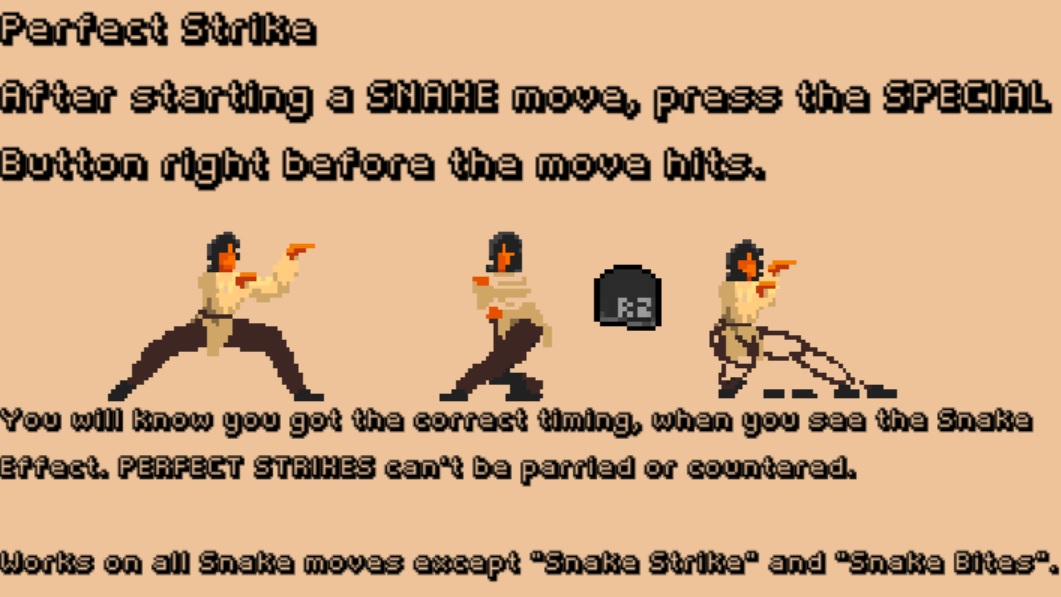 I also think, that this still needs a way better explanation and more feedback to the player. I already have something in mind here.

I will do a devlog once I implement the changes. Would be cool, if you could give me feedback then again!

I think any different control scheme will be unintuitive. All you need, I think, is to give people enough time to get used to it, preferably without pausing every 5 seconds to look up the moves!

Regarding the analog stick: you're probably right, since you've tried it. Either way, it shouldn't hurt to implement it and give people the option? (not sure how much work this is, maybe it's simply not worth the trouble). But the button presses may also become easier with more use, so no pressure there.

I definitely think the biggest problem is feedback. Once the player knows what's going wrong, it's easier to correct.

Will do, good luck!

Hello! This game is honestly amazing! However making combos is very difficult on keyboard since it registers the start of the combo as an attack... if this was fixed, the gameplay would drastically improve (on keyboard), Console wise this game is perfect. Sometimes the AI for the enemies is wonky but most of the time the game works really well. Love the aesthetic, the weird nostalgia and the new gameplay format. Keep it up! :D

Thank you for the very kind words!

Can you go a little bit more in depth on your keyboard/combo problem? I'd like to refine the combat mechanics in the next few updates, so maybe I can adress your issues as well then.

I'll be happy too! The only difficult combo is probably Snake Fang.

So when you try to perform the combo it registers as a Snake Strike or Snake Bites automatically.

So maybe if there was a delay to register to combos/attacks it would help? (1 second delay or more.) It would be nice for fast gameplay while making complex combos like I see in the game but it registers attacks and combos and little too early. I hope this helps! :) sorry for wall of text lol.

Lets see if I understand you correctly: The timing for the 3 part combo is a bit too hard right now and would be better if you had some more time in between the attacks to input the next attack. Right?

If you want, you can join the discord channel, then we can go into more detail.

Also one more thing. I really appreciate your concern in making the game the best it could be. It honestly makes me happy to see developers care about concerns with the game while putting there vision in it. I will definitely stick around to see how far you go with this project!

some awesome potential.  the control scheme is REALLY difficult.  I like that there are complex moves, but the response just doesn't feel 'snappy' enough. But really cool design. I couldn't beat the Red guy.. he was way too hard. I hope you keep working on it!

Thanks a lot for playing! I agree, I am not happy yet with how the controls feel and will definitely work on that more. Thanks for the feedback!

It worked the second time i rebooted it. I am not sure what happened I think it may be because I entered full screen.

I am poor amd I am not into fighting games, so I probably wont buy your game, but the idea is damn cool! I mean, it looks like you are aware of problems of such game type (like smashing buttons to defeat enemy which maby is rewarding but not fun at all) and you want to make your game without such exploits or "anti-features". This is awesome, keep going and don't give up! If you will ever loose hope in your game, remember that it is unique which i proved and has the potential. This is what should people call indie game, you've just made me smile bro :)

Wow, I couldn't have hoped for a better first post! Thank you very much for the kind words and inspiration :) 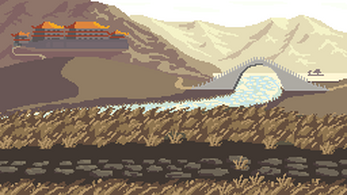