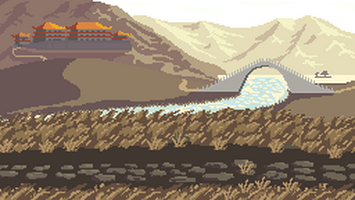 It's been a week since I published here on itch and the reception so far has been more than great! Folks have been very nice and gave good feedback (some even want to collaborate!). Be it here in the comments, on reddit or on twitter. Thank you for your interest and to everyone who shared my stuff!

If you want, feel free to join on Discord and tell me directly what you think :)

Now on to the update:

One of the animations I was really not happy with is the running animation. It's very stiff and the feet really dont work (also the protagonist kinda looks like a hunchback in it).

So I broke the animation down into the essential parts and tweaked them until I was happy (2).

Then I went over it again with color and gave it some volume, to see if it would translate well. I think the head sway adds a lot (3).

It is not perfect yet, but I am definitely happier now seeing the little guy run.

The Sound Of Music

I added some ambient sounds to the bamboo forest part and also wrote a little background song, that will play during the "road"-level. You can play the demo to hear it for yourself or take a shortcut and listen to it here:

In an effort to make the first few enemy encounters a bit more interesting, I rearranged the moves you get. The Snake Sweep will now be available from the beginning (taught in the tutorial) and won't drop anymore from the first enemy.

I also went over all characters and got rid of those nasty empty spaces. Just a quick and dirty job, but a lot easier on the eyes when playing.

Let me know what you think and if you like these kind of updates.

Get The Five Gods of Kung Fu

The Five Gods of Kung Fu

The little things count! Little by little this game will be perfect.